In a short while you will be receiving your newsletter with the State Meet information.

I have received 2 registrations already with the members printing the form from the website. ( See “2019 37th State Meet” tab on main menu for these forms)

Remember to get them mailed by October 1, 2019 for me to receive them before the meet. Early registration will allow me to print your name badges. After October 1, please bring them to the registration desk at Snyder. ( If you are unable to come to Snyder, please still use the registration form to send in an updated personal information form along with your annual dues of $30.00)

Here’s a preview of the patch. The Snyder Chamber of Commerce has a wonderful logo that we received permission to use on the Snyder patch. Jeanne Farquharson of Creative Graphic Solutions LLC in Abilene has been our source for embroidered patches for many years.

Please remember your annual dues are to be paid by October 12, 2019. The State Meet registration has a place to add your dues to the total when you fill out your Registration.

Check your printed Roster to make sure the information is correct.

$30.00 will keep you current and on our mailing lists.

Hope to see you in Snyder.

SNYDER, TEXAS IS Ready for us! 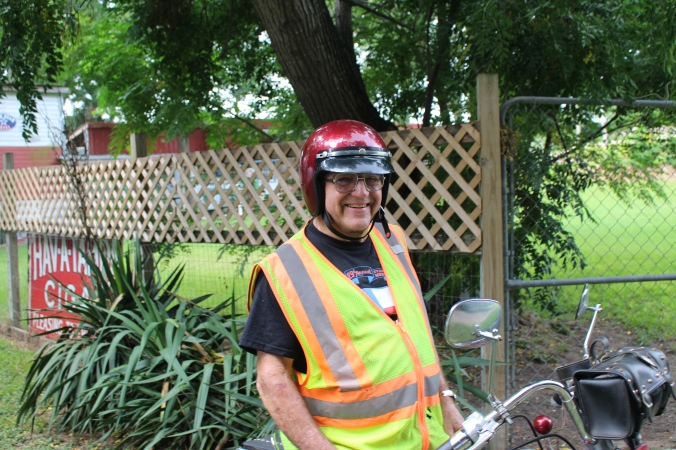 See you in Snyder

As you know, the newsletter will have a complete write up but you will find the pictures here!

The crowd began to gather on Thursday, July 18, 2019. Hotels, campgrounds, and local homes showed the activity of “Cushmans  are Coming to Town”.

Friday morning began with donuts and coffee. There was a morning ride of 23 scooters through Tahitian Village, Bastrop State Park, and North Shore of Lake Bastrop. Debi Goode drove the chase vehicle this day and on Saturday.

Richard and Betty Kesselus hosted  the Friday night tradition of fish fry and onions rings brought together 35 people. Richard and JJ Mooney were hot and tired after frying all that fish! Thanks to Judge Chauvin for providing the fish. 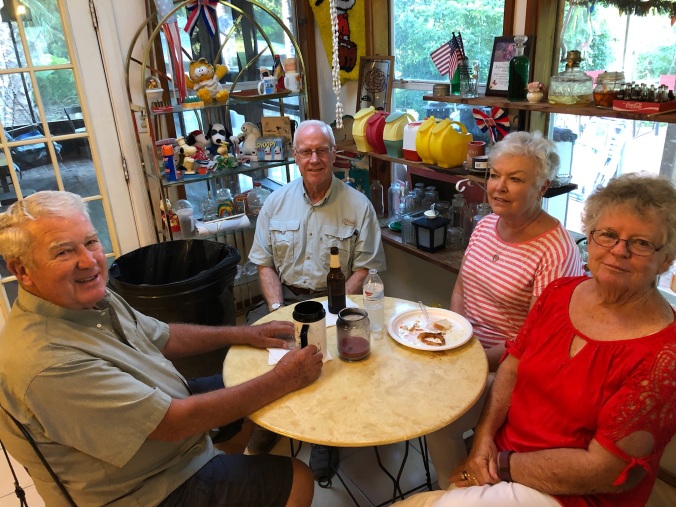 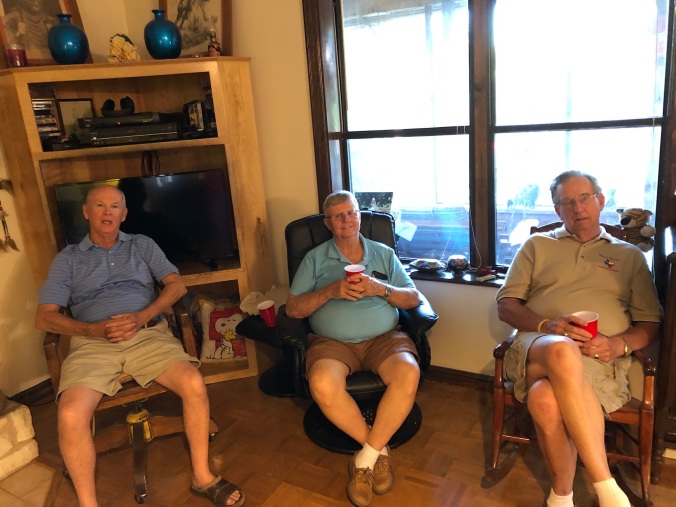 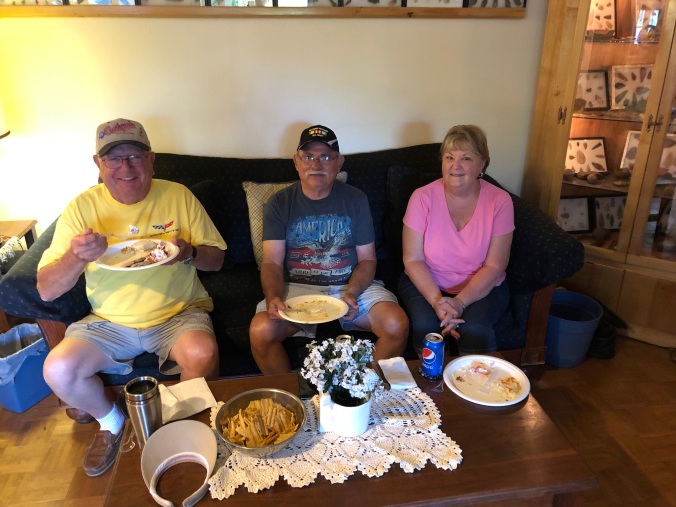 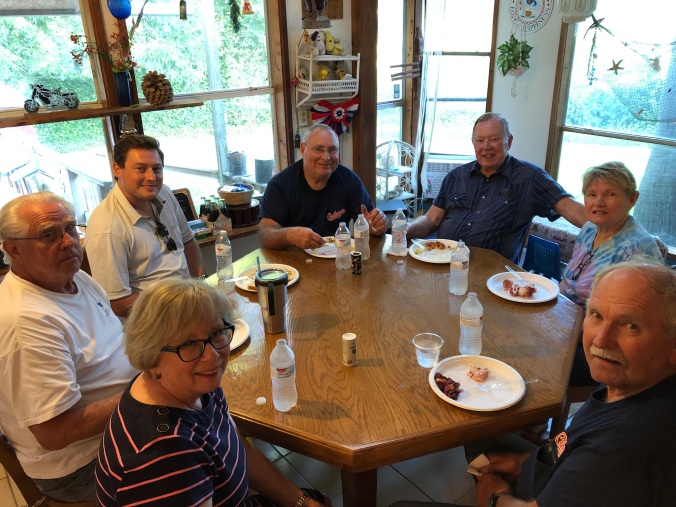 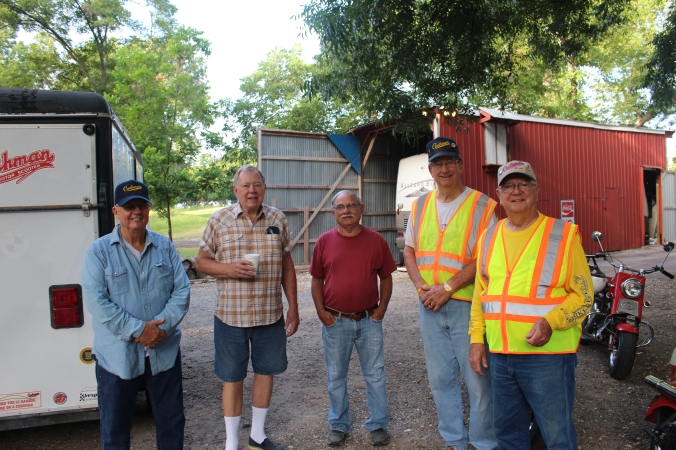 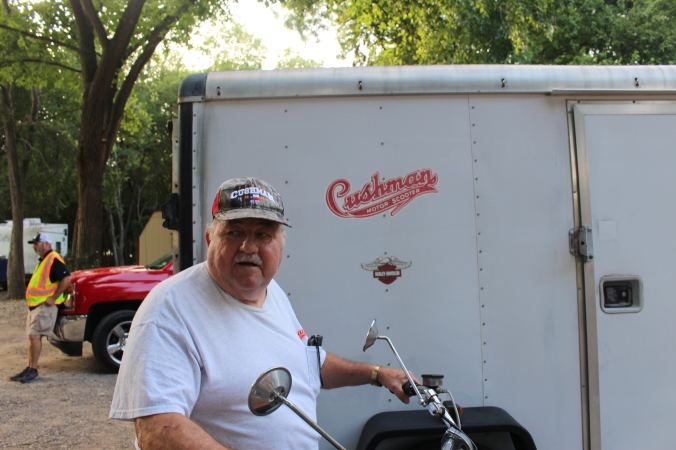 JJ Mooney cleaned up and ready to ride 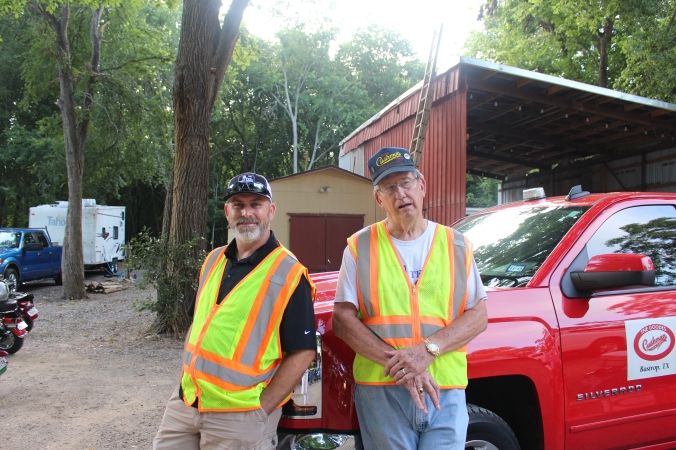 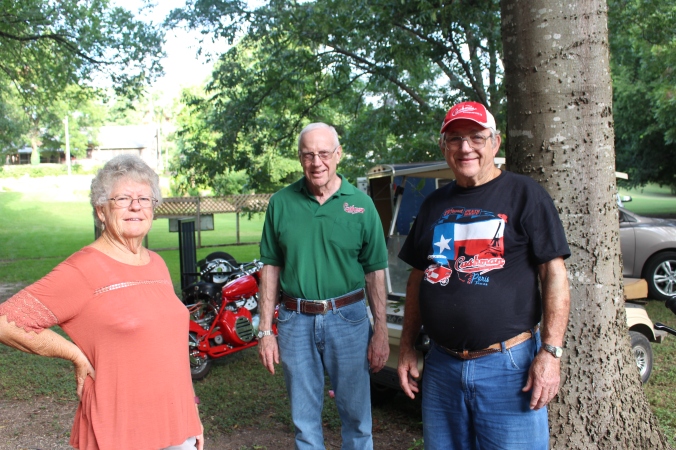 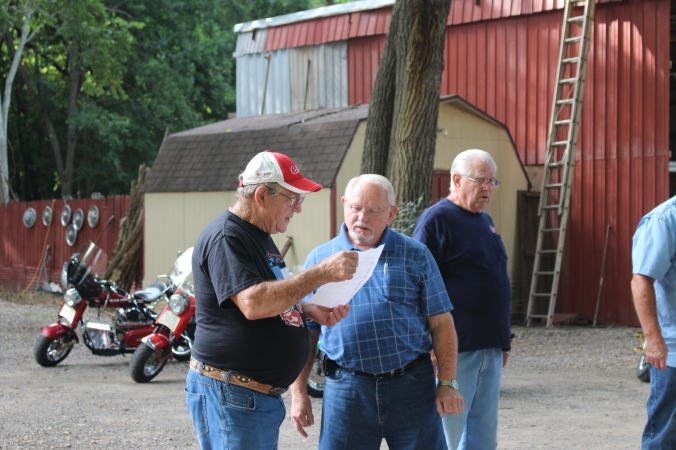 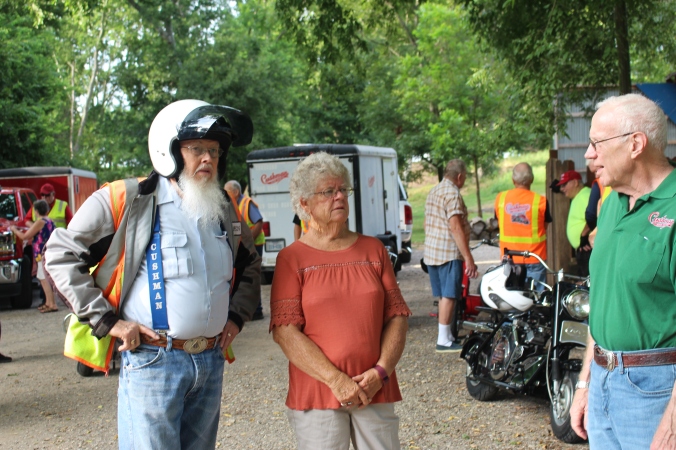 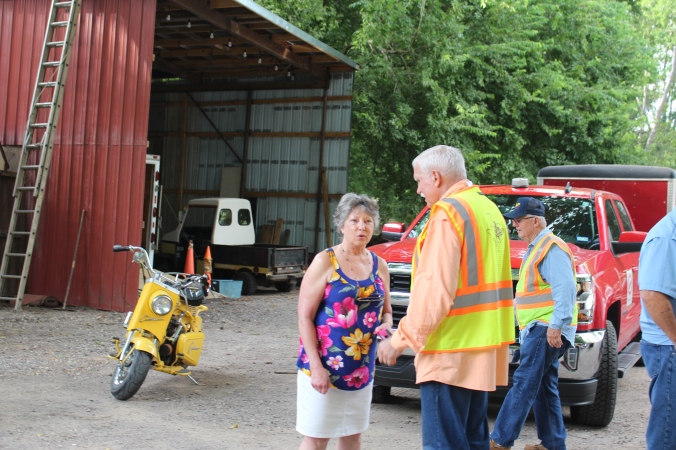 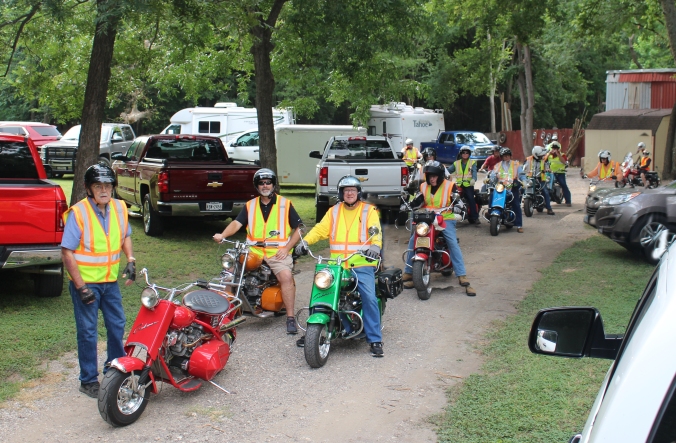 To Rockne and Red Rock with a lunch stop at El Borrego de Oro. 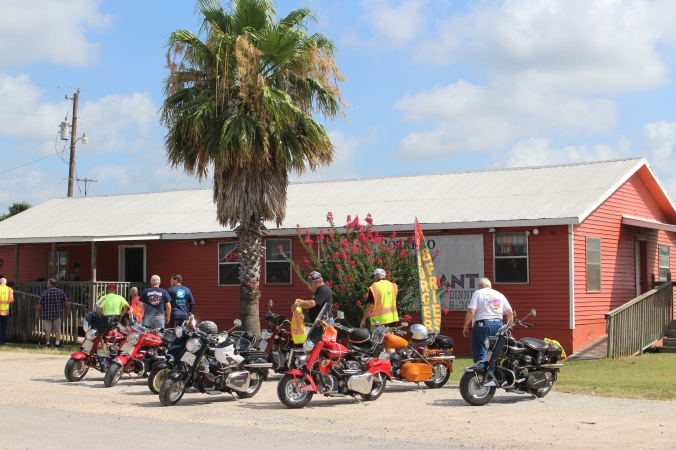 An ice cream stop and then back home:

As with all good times, there comes the good-bye until next time.

Thank you Richard and Betty Kesselus for hosting the Central Texas Meet.

Central Texas Meet 2019
Another great time with NO rain ( hopefully)
Thursday July 18
Early arrival after 12 noon
Meet and Greet all afternoon and then go to Mediterranean Grill for supper together at 6:30 PM
Friday July 19
7:30 Coffee and Donuts Richards Fish Kitchen
9:00 AM  Ride leaves 30-35 MPH roughly 45 miles Return by noon Lunch on your own and several local activities including large Corvette show in town.
3;00 PM Board Meeting Richard’s House
6:30 Fish Fry and Visit
Saturday July 20
7:30 Coffee and Donuts
9:00 AM Ride leaves,  Lunch on the Road Dutch Treat, Return through the Lost Pines,  See the burn and regrowth.
For those staying we can visit and tell lyes and then decide where to go eat together.
Sunday  July 21
Breakfast together , Ride or Drive  Meet over, Sad time to see all depart 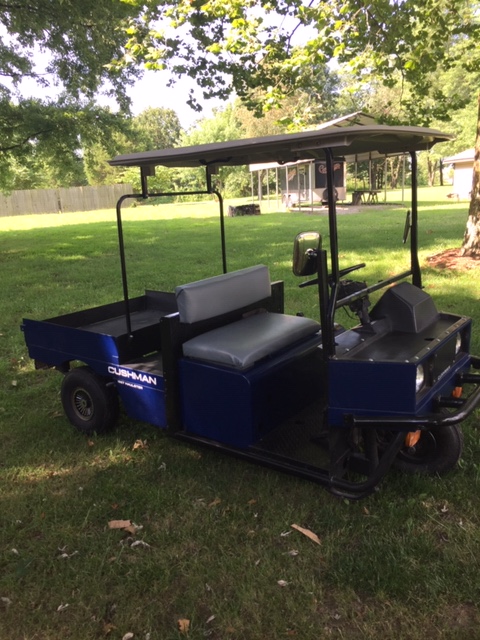 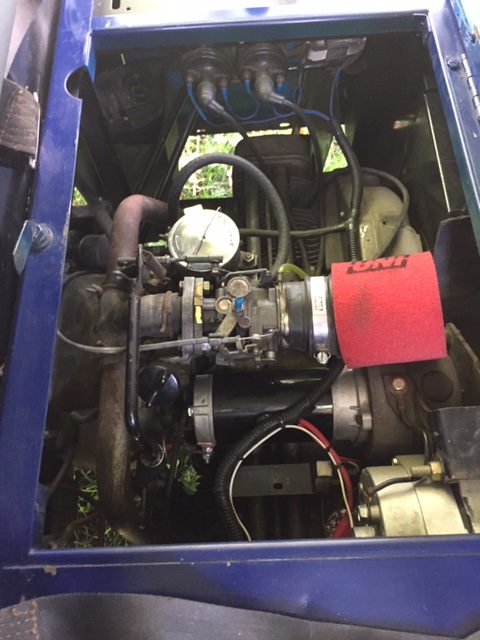 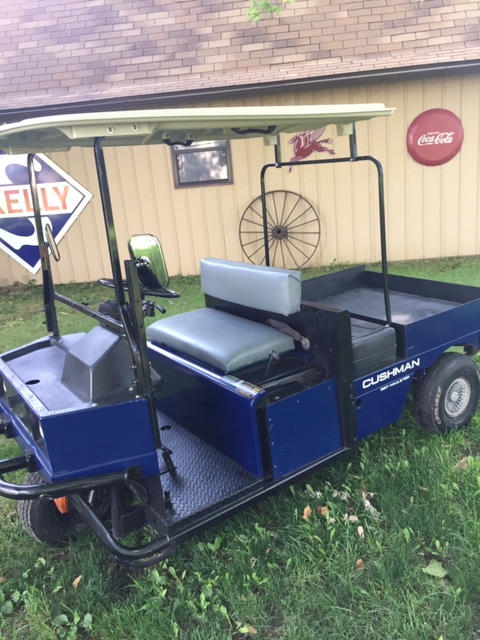