With promising weather and seafood in the forecast, we had 37 people in Aransas Pass this last weekend. Don Henry and Homer Schelling planned 3 days of rides and meals.

Lunch was a stop at Charlotte Plummer’s resturant in Rockport.

Then THE NECESSARY Ice Cream stop in Fulton, Tx. 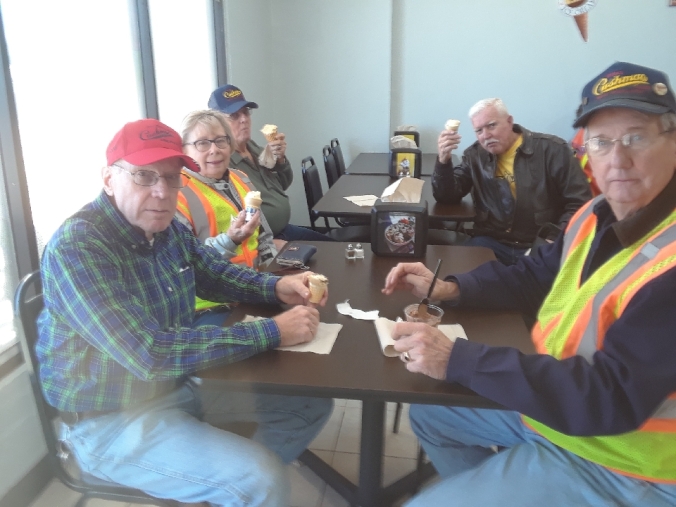 Thursday night John and Barbara Allbright served a meal in their home in Aransas Pass. 29 people enjoyed gumbo, beans, rice and all the desserts you could hold! Margaret Hoese and Howaida Vasquez also joined the group.

Friday morning, 18 scooters were in line for the ride to Port Aransas and Corpus Christi. Lunch was Doc’s or Snoopy’s.

Dinner was at Fisherman’s Daughter.  The food was again great and the dessert was white chocolate bread pudding. (And, yes, Don did share!)

Saturday’s ride was a lot of miles. The Aransas National Wildlife Refuge was the destination of 12 scooters.

These are special people who were there from Devine, Tx. TCC #25, Hazel and William Davis. Our club was begun because the first 30 members had a dream of preserving Cushman Scooters. William rode his scooter on Thursday and Friday. He and Hazel drove chase vehicle on Saturday. The “Caution: Cushman Scooters” is on the back of his trailer.

Thanks to Debi Goode, Richard Kesselus, and Chrysti Love for the photos.